Bitcoin mining is one of the hottest topic around crypto currencies. As Bitcoins rise astronomically in popularity (and valuation), mining becomes more attractive. On the other hand, due to the currency rules, less coins are available to be grabbed by miners and more work is required!

Nonetheless, it is worth looking at how Bitcoing mining works and certainly give a punch, if you like a good challenge! 🙂 Here in this article we are talking about the concept behind mining, some of the technical meaning, how can you make money mining bitcoins and how you can join mining pools.

Imagine if you had access to some land which you know it has a gold mine in the middle of it. You might consider buying some heavy duty power tools, hire some manpower and start dig asap!

Gold is a currency that, as many others, retain its value due to scarcity. There is a limited amount of gold in the world. And as more gold is mined, harder is to find more of the precious metal. The existing gold tends to grow in price as people hoard more metal and less of it is found in the planet.

In this aspect, Bitcoin does arguably shares some characteristics with gold. Although Bitcoin is a virtual currency, its value is also influenced by scarcity, because the number of bitcoins in the world is limited. When this fantastic cryptocurrency was created,  a hard limit of 21 million units was defined as its maximum limited, and according to a lot of clever people, more bitcoins will never be created.

By doing this, miners are providing ’proof of work’ that is rewarded with digital currency. Broadly speaking, there are two proof-of-work hashing algorithms in use today: SHA-256 and scrypt.

The SHA-256 algorithm favours good processing power. In bitcoin’s very early days, anyone could mine effectively with the CPUs and GPUs (graphics processing units) that you find in a normal home PC.

That time has passed, however, and the difficulty level of bitcoin is so high that specialised processors known as ‘Application Specific Integrated Chips’ (ASICs) are best suited to use when mining.

The use of such powerful processors, along with bitcoin’s exponential increase in difficulty level, have created a technological arms race, which means that even quite recently designed chips can quickly become obsolete.

It is the quicker and more simple algorithm of the two, and as new digital currencies are being introduced, more of them are favouring scrypt over SHA-256, because it is much easier to run on an already-existing CPU, and tends to use up less energy than using SHA-256.

Undoubtedly, scrypt its favoured by most individual miners.

In comparison to SHA-256, Scrypt’s hash rates for successful coin mining generally range in the kilohashes per second (KH/s) or megahashes per second (MH/s) areas of difficulty, which can be achieved with regular computers without the need of ASICs or other hardware.

The scrypt algorithm favours greater amounts of RAM and parallel processing ability, facilitating the operation of many mining pools.

How can I earn money with bitcoin mining?

Doing billions of mathematical calculations for millions of daily transactions needs computing power, therefore miners can charge a fee (in bitcoins) for doing these transactions.  In additional to the fee, miners also earn “bitcoin rewards”, which effectively are new bitcoins created for them.

The amount of dollars earned for mining bitcoins obviously depends on the valuation of bitcoin itself, but just to give some perspective, at the time of writing this, miners across the globe are earning in total over $2.3 million dollars daily on transaction fees. These fees are variable and can go up or down in future, but the total amount should keeping going up as bitcoins get more popular.

On top of the fees, there are (at the moment) 1,800 new bitcoins being generated per day, and be given to miners for their hard work. At current exchange rate, that’s a around $9 million dollars! 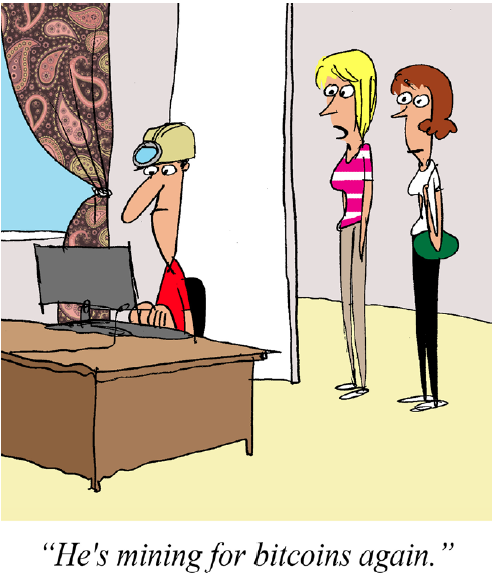 Who can be a miner?

In theory, anyone in the world can be a miner, including you and me. But our mining capabilities will be limited on the processing power of our computers, to be able to do those zillion mathematical calculations.

It gets worse. As more bitcoins are created, more calculations are required and the reward of new bitcoins also gradually reduces. Since 2009 when Bitcoins became very popular, the number of transactions, currency in circulation and also miners grow very rapidly.

Now, a single personal computer is capable of mining, but unlikely to have enough CPU power to generate new bitcoins. Your PC can generate a fraction of a bitcoin, but not the entire unit. Today, one single bitcoin unit is worth almost $ 5 000 dollars, therefore a fraction might be still some worthwhile amount.

As more computing power is needed, many “mining” startup companies were created (and still are), and by investing in parallel computing, they are able to generate new bitcoins. Still, they have limited resources, which led many of these companies to create the so called “Bitcoin Mining Pools”.

The mining pools are companies who allow you to connect to their mining network. Together, thousands of people spread across the globe can make mining more efficient, and share the profits! Bitcoin mining in pools began when the difficulty for mining increased to the point where it could take years for individual miners to generate a single block.

Bitcoin miners pool their resources together and share their hashing power while splitting the reward equally according to the amount of shares they contributed to solving a block. Percentages of the profit are awarded to members of the Bitcoin mining pool who present a valid proof of work that their Bitcoin miner solved.

Each mining pool operates on slightly different way, with different options on how you can join the fun and there are many good Bitcoin mining pools to choose from. Although it’s tempting to pick the most popular one, it’s better for the health of the network to mine with smaller pools so as to avoid potentially harmful concentration of hashing power (it means eventually, just a few pools will be dominating the mining market).

You can either store your wallet locally or store it online. Coinbase is an online wallet that is very simple to set up. Wallets require you to use or download a fairly large blockchain file (which might be about 6GB), therefore downloading and updating a local wallet might be a non-starter for many people.

Use this link to earn $10 FREE when joining Coibase!

Still, if you prefer a more “geek approach”, you can download and install a bitcoin local wallet.

To mine in a pool you have to work with a group of other miners on available blocks. One very popular pool is SlushPool. You will need to register yourself to open an account, inform the address of your Wallet and add “workers“.

Each worker is actually a system you have to mine coins. These can be Windows PCs, Macintosh or Linux systems. With SlushPool, each worker has a subaccount. The process is very straightforward and very intuitive, therefore doesn’t need much detail here.

Each worker needs a miner client. For SlushPool you can get the clients here. Their setup is also straight forward, and hopefully in minutes you will be successfully mining.

If you are already desperate to start mining, you might also want to consider how to leverage the mining idea, by creating your own custom mining infrastructure.

Between things you can consider are:

What else do you thing would be cool to do, in regards to bitcoin mining? Use the comments below to give us a bit of your geek wisdom! 🙂

Continue reading...
World's greatest investors
What is leverage?
Is this a good stock at a cheap price, or a cheap stock at a good price
What is Forex
Top 10 IT jobs in USA & average salaries 2017
Buying a foreclosure house in California
How to Make Money at Home Buying and Selling Websites
How to Find the Perfect Job Online